The last few days we have been enjoying Bronte countryside in South Yorks. staying with some friends in a farm cottage. Weather has been mixed, walks have been stretching and internet access has been very erratic. So....I've been quiet for a few days (though another writing commitment forced its way into my daily routine!)

Last week I spoke at a national day conference in Oxford organized by the Evangelical Alliance. It was entitled: 360degree preaching and leading...so I was given a huge amount of lee-way with the subject matter! It was limited to 45 attendees and proved to be extraordinary lively with plenty of interaction.

A couple of things stood out for me:
First, all kinds of evangelical church were represented from traditional C of E to house church, from urban plant to rural, both black and white, with a smattering of academics present too. You know it really livens things up when such a range of people are present.
Second, was the surprise and delight expressed by several that this was the first conference on preaching they had seen advertised for many (many) years. One attendee from Devon had to book his train ticket well-ahead and told me he was convinced the conference would probably be cancelled because of lack of interest. 'I've not seen a conference like this for years' he said. 'I had no idea all these people would come!' Of course, 45 is not that many but could it be that church leaders are waking up to the pivotal importance of preaching? How I hope so.

As you can imagine I was thrilled to take part. Actually I mentioned blogging several times...so maybe some of the attendees are even reading this!
Posted by MichaelQuicke at 1:11 AM 1 comment:

This week I have been back in Oxford, at my old seminary Regent's Park College, leading a five-day ministry seminar on my book 360degree leadership. Interestingly, it's the first time that I have taught on this side of the Atlantic for 10 years!

It's been lively, with every member of the group fully committed and representing diverse situations of ministry. Beginning (mostly) as strangers on Monday we have grown into a tight-knit group full of trust, honesty, and love. It has helped that each day has begun with half-hour worship, led by different members. Nothing unites people more than worship. And, today (Friday) we heard four sermons - the outcome of four groups' sermon collaboration through the week. Wonderful!

Several members shared how the week had impacted them and their ministries. I have learned much too. When believers spend concentrated time together, special God-happenings can occur. We are so grateful for another positive growth time in the city of dreaming spires. If you belong to a small group over a period of time (concentrated or not) you probably know this experience too. Yes?
Posted by MichaelQuicke at 9:37 AM 2 comments:

After meeting former fellow-students from 50 years ago, this last weekend awoke even older family history. Carol and I were back at Chatsworth Baptist Church, West Norwood where Carol came to faith,was baptised, and where we were married, and I was ordained. It was a celebration weekend in brightly refurbished buildings. Before the church filled up Carol and I wandered through familiar rows of pews remembering where we once sat and some big moments of the past. Reconnecting with old friends kept throwing us back into rich conversations about times shared and key people who had influenced us.

I preached on both Saturday and Sunday. I tried not to look back too much though I couldn't stop telling some stories! To one side of the newly refurbished church was a glass case containing an open book. On each page was inscribed the name of one person who had gone out into ministry from the church. Tens of names are inscribed on its pages, covering over the last 130 years. Bless them, they had opened the book at my name, underneath which was a list of the places of my ministry. How humbling!

How much I owe to this church for its nurture and prayers through the years I cannot tell. Yet again, a stirring from the past has taken me into deep places of gratitude.
Posted by MichaelQuicke at 1:26 PM No comments:

A Reunion with Edge

Last weekend I met with a group of people most of whom I had not seen for fifty years (or so). They were members of the Robert Hall Society -the Baptist student society of Cambridge University (named after a famous English Baptist preacher). All had begun as students between 1958 and 1965. Around 70 of us gathered to spend at day at Fitzwilliam College, concluding with chapel worship.

I have been to few reunions (so far) but this was definitely different. After an introductory talk on how much Cambridge has changed, given by a former member who is now a Professor of History at the university, five people spoke about their life journeys since being students. They shared so honestly about sadnesses, disappointments, illnesses along the way. Yet, overwhelmingly, their life work and relationships expressed such Christian faith that radiated through many different signs of fulfilment. They spoke about growth, God's surprises, service at home and abroad, and the continuing adventure of living for God. Someone later commented about the sheer hopefulness and forward-lookingness that expressed a commitment to go on living fully into yet older years!

It was good to meet old friends - it really was. But hearing such reflections made me think hard too? Just how would I sum up my life journey so far? And what about you?
Posted by MichaelQuicke at 2:18 AM 1 comment: 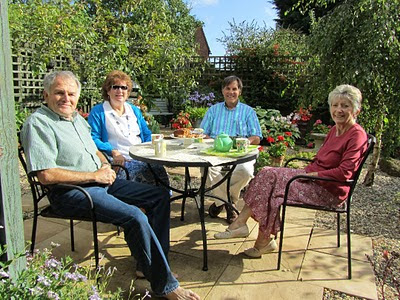 Just to show you how the sun can shine in Suffolk, here we are with friends Ray and Yve! Enjoying an English Cup of Tea! Before arriving in Suffolk we continuted sorting out our past (in boxes and bonfires) and spent several happy days with our London family. I wish I could post photographs with them (Ray helped me above!) having many more cups of tea (though the wet weather rarely allowed us to sit outside).
Just to keep us rooted (!), we have learned that in spite of turning off the water supply in our US home, the valve proved leaky and filled up a faulty washing machine to overflowing.... innundating the immediate area and then flowing through the floor into the basement. For the second time in six months water has therefore wreaked havoc in the basement. Fortunately, a great neighbor and a very practical friend have stepped in to rescue the situation and are drying out the carpet and assessing the damage even as I write this. You just never know what's going to happen next, do you?